END_OF_DOCUMENT_TOKEN_TO_BE_REPLACED

A brief summary of student news you may have missed this week, including Aberdeen student attempts to buy a castle, Plymouth blow £300,000 on a video screen that can't play video and the University of Sheffield scrap library fines.

Birmingham City University teach their students how to wash

Not bad, for a first attempt.

Birmingham City University apparently don't trust students to figure out how to wash their own clothes. They have issued step-by-step instructions on how to do this, as if they couldn't figure it out for themselves, despite being intelligent enough to attend university.

It's an 8-step process, the best of which is point 6: "Add clothes to the machine" and step 8 "turn on the washing machine".

It also advises you check your phone isn't in there before you wash, even though it's the device you're most likely to be reading the advice on if you're already in the laundry room.

Come join us in the "everything must die" room where we'll give you a talk about endangered species and why they're so fun to shoot.

Students from Aberdeen University's Shared Planet society spotted a mansion for sale, and decided they'd try and buy it. If the campaign is a success they plan to house a lot of asylum seeker in the castle and watch the reaction on Nigel Farage's face.

The 32 room mansion, which is listed on Rightmove, looks like the kind of place upper-class millionaires and serial killer Ted Bundy would really feel at home.

And on the screen they've put an image of a smiling man, when a similar effect could be achieved with a smiling man and a window.

Plymouth University have spend £300,000 on a video screen on which they are not allowed to play any video.

Plymouth have been criticised heavily lately for their overspends. In fact, the screen doesn't seem so expensive, if you look at it as the budget they would have spent on 22 graduation chairs.

That's right, Plymouth also got in trouble in September for spending £95,000 on a total of 7 graduation chairs. 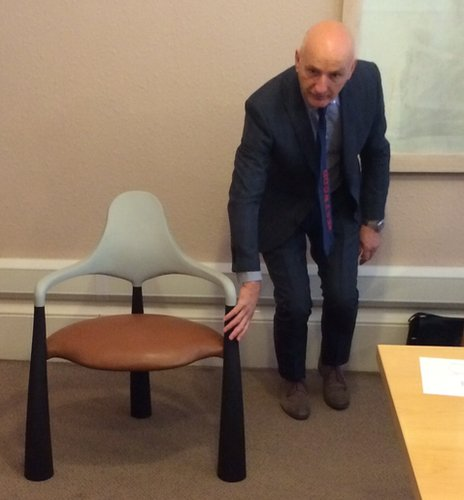 Plymouth's David Coslett, pictured here anticipating £13,500's worth of ass-comfort, and demonstrating how he used to squat against a wall.

Professor David Coslett, deputy vice chancellor, said the university's annual graduation week attracted more than 25,000 students and guests and injected about £700,000 into the city's economy. Which is great, if you forget that 1/7 of that income has now been blown on his ass-cheek comfort budget.

If you do drop out, follow Bender's two-step backup plan.

A study by the Institute of Fiscal Studies (IFS) found that students from poorer backgrounds were 8.4% more likely to drop out of university. They were also 22.9% less likely to graduate with a 2:1 or higher.

In more depressing news this week 2 days later the government declared a review of student loans as "unnecessary", despite calls for a review from the Commons Business, Innovation and Skills (Bis) Committee. They predicted the student finance system would be carrying £330bn of debt by 2044.

Soon getting a cat to stare at you and demand books they have no idea how to read will be a library's only hope of getting books returned.

The University of Sheffield have scrapped library fines for their students. Books will now automatically renew if they haven't been returned. The only sanction they'll face is being unable to take out more books if they fail to return a book after another student has requested it.

The Sun offered thousands of pounds for photos of students in "bad taste" halloween costumes.

They were looking for offensive costumes much less adorbale than this.

The Sun began offering students money for photos of other students in "bad taste" halloween costumes.

Among others, they were specifically looking for people dressed up as murdered aid worker Alan Henning.

It's unclear why anyone would ever go in this costume, unless they knew they could get paid for it. In effect they were trying to give fiscal incentives for students to dress up as murder victims for the entertainment and outrage of their readership, and upset grieving relatives in the process.

Harvard teach students a course we're too shy to describe

You're on your own with this one.